Customize the user interface of the application during design time as well as during runtime, if required.

Activated users get the ability to customize their perspectives during runtime using any browser, independently and individually.

The UI designer is seemless integrated in the OS.bee Software Factory as soon as it is installed. 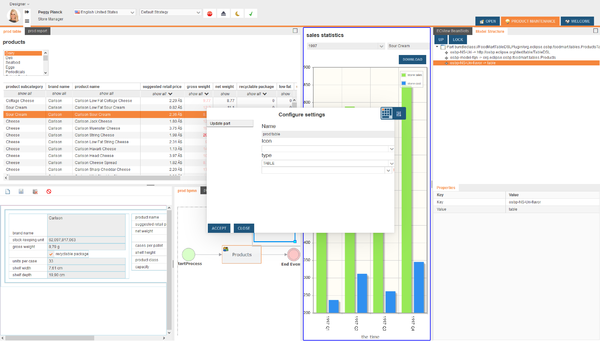 The task of UI Designer is the creation of perspectives based on a “running” OSBP web application.

In Vaaclipse, a perspective is described by its Application.e4xmi model (“e4 model” in short). This model is rendered at the startup of a new web session. Additionally, the renderer registers so-called EventHandlers that monitor the e4 model of the active web session for changes (and update the web UI whenever necessary).

The following picture displays the architecture:

The UI Designer interacts with this architecture by modifying existing e4 models and/or creating new ones. It offers commands, menus and UI actions that allow for changes and customizations to the e4 model.

Furthermore, the UI Designer supports the various models occurring in the OSBP (such as table, grid, dialog, report etc. models) as content sources for the UI parts.

The bundle for the UI Designer is called net.osbee.vaaclipse.designer.

In order to make use of the UI Designer, the bundle “net.osbee.vaaclipse.designer” has to be added to the “.product” definition of the project in question.

Subsequently, the addon “net.osbee.vaaclipse.designer.addon.DesignerAddon” has to be activated in the e4 model. This addon provides the necessary preconditions for using the UI Designer.

The DesignerAddon is responsible for the following:

Designer Area in the e4 modell

Furthermore, an area for the designer has to be created in the e4 model.

This area contains all parts for the designer (see the following picture).

Placeholders within the perspectives

Afterwards, the Designer Area has to be attached to all perspectives. For auto-generated perspectives, an appropriate placeholder is added automatically (see the following picture).

Finally, menu entries have to be created in order to be able to activate and control the designer. 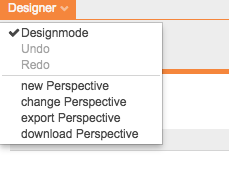 The DesignerOverlayExtension is a Vaadin extension that attaches an overlay to every “extended” component. This overlay is configured by the IWidgetDesignConfigurator. The implementation is located in the repository “org.eclipse.osbp.vaadin.addons” in the “org.eclipse.osbp.vaadin.addons.designer.overlay” bundle. The following picture shows the DesignerOverlay.

Using the DesignerOverlay, changes to the e4 model can be performed much more efficiently since one click is enough to set various UI properties.

Detailed information can be found in the JavaDoc of the DesignerOverlayExtension

Using the UI Designer has been made as easy as possible. In this example, we will create a new perspective and export it to the Xtext perspective model.

First, the designer has to be activated via the menu bar: 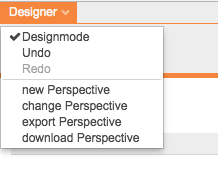 The menu action “new Perspective” opens the dialog displayed below. 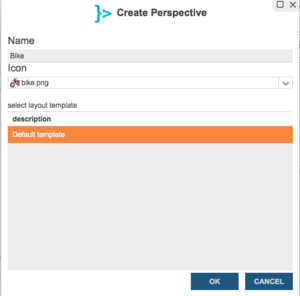 Choose a name, an icon and a template (currently, only a “default template” is available; additional templates may be contributed via the IPerspectiveLayoutProvider API). Click OK.

The “bike” perspective has been created -- only the layout is defined though, no content is present at this point.

Content can be added using the DesignOverlays described above.

Keeping the “Alt” key pressed, click anywhere within the “Listpart” area. The DesignerOverlay is displayed. Select “Properties”, and a dialog appears: 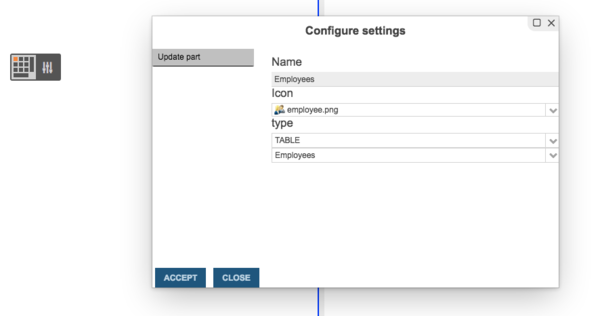 Activate “Update part” in this dialog and apply the settings shown in the screenshot above. By clicking “Accept”, the e4 model is updated, and the “Employees” table is added to the UI.

Change to the UI part “Detail” and repeat the above steps until the dialog is displayed. 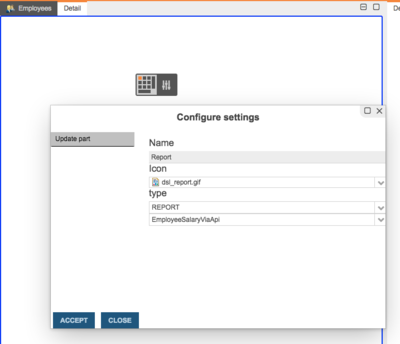 Apply the settings shown in the screenshot above and press “Accept”: A report is displayed.

Finally, the tab “Report” can be moved below the table part via drag and drop, which leads to the following result: 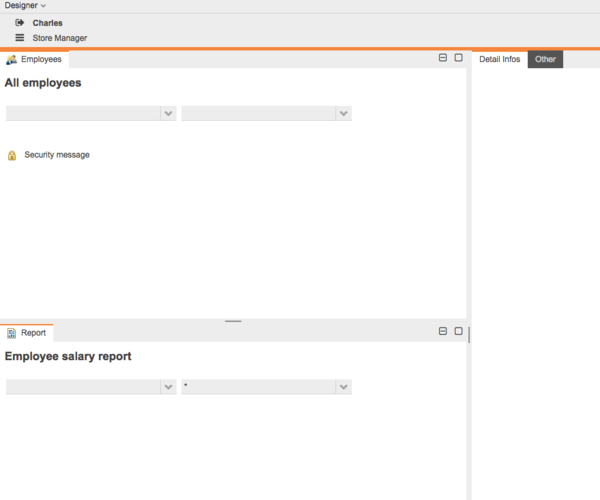 In order to customize the two remaining parts “Detail Infos” and “Other”, proceed as above.

When exporting a perspective, it is important to set the property “-DdebugOwnerWorkspaceLocation={git}/foodmart-models” in the “.product” configuration of the project (“{git}” is a placeholder for the path to the git repository).

This path will be used during the export in order to select a target directory in the OSBP.

Select the action “Export perspective” in the menu and select a target directory (preferably, in parallel to the Xtext perspective model). After clicking “Accept”, the file is exported.

In the IDE, select the folder where the perspective has been exported to and hit F5 for refresh. After the refresh, the exported file is visible (in our case, “org.osbee.perspective.Bike.mperspective”).

This file can now be merged inot the Xtext perspective model automatically. In order to achieve this, the model files in the preferences under OSGP CSV2App have to be maintained. Right-click on the file “org.osbee.perspective.Bike.mperspective” and select “Convert to OSBP Perspective Model”. 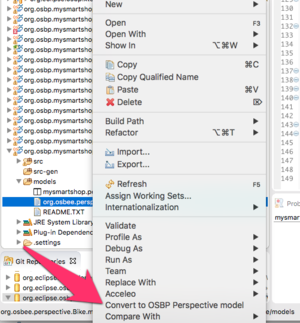 After this click, “org.osbee.perspective.Bike.mperspective” is merged to the Xtext perspective model.

Opening the Xtext perspective model shows the new model content that has been automatically added: