The DTO DSL facilitates the creation and handling of data transfer objects (DTOs) in order to transfer data between processes. Communication between processes is usually done by calls to remote interfaces and services, where each call is a computationally expensive and time-consuming operation. The use of DTOs that aggregate data that would have been transferred separately reduces the number of calls that are necessary, thus speeding up the data-transfer operation. Furthermore, DTOs are decoupled from the JPA, thus eliminating burdensome dependencies.

Using the DTO DSL, it is easy to create DTOs and the mapper classes that link them to the respective persistence entities. Property-change support is automatically included, in order to have current data without direct dependencies on the persistence layer.

The main semantic elements of the DTO DSL are the following:

► Note: In order to make use of the DTO DSL, one has to make sure that the OSBP builder is executed after the Xtext builder.

DTO models are described in .dtos files. These files describe the DTO model and are the basis for the code generation. DTO models may be split over several .dtos files containing packages in the same namespace.

A .dtos file may contain several packages with DTOs.

Packages are the root element of the DTO DSL grammar. Everything is contained in a package; imports, datatypes, DTOs and enums have to be defined within the package. One document can contain multiple packages with unique names.

The elements a package can contain are DTOs and enums. Additionally, a package allows import statements and the declaration of datatypes.

Figure 1 - DTO model file - a package is the topmost element and contains other items.

In order to wrap entities into DTOs, the DTO DSL has to reference entities defined in entity model files. Furthermore, it is possible to reference DTOs in other packages. The import statement is a way to address these elements without having to use their fully qualified name.

Import statements allow the use of the '*' wildcard.

Figure 2 - Items contained in another package can be accessed and handled if the package is imported.

dateTypes
The datatypes for handling temporal information can be defined by the following statement:
datatype <name> datetype date|time|timestamp;
Datatypes that have been defined in this manner can be used as property variables in DTOs.

blobs
Binary blobs can be handled by defining a datatype with the as blob keyword. The Java implementation of such a blob is a byte array.
datatype <name> as blob;

After import statements and datatype definitions, the content of the .dtos file is made up of DTO definitions.

Data Transfer Objects (DTOs) are the most complex elements in the DTO DSL. A DTO wraps an entity defined in the Entity DSL together with its properties and references into a single object used for communication purposes.

DTOs are defined by name, properties, references and wrapper methods. A DTO normally does not implement business logic.

For each DTO that is defined in a package, the DTO DSL automatically generates a Java DTO class and a corresponding mapper class that handles data transfer and conversion between DTO and entity.

Figure 3 - The defined DTO is translated to a Java class and an appropriate mapper class.

extends marks a DTO that is derived from another DTO. That means that the properties and references of the parent DTO are inherited.

File:Dto-04.png
Figure 4 - The extends keyword causes a Java subclass to be created for the DTO.

wraps indicates the entity that is handled by the DTO. The entity has to be imported from the entity model file into the DTO package (for importing several entities, the use of the '*' wildcard may be advisable).

Figure 4 - The wraps keyword links the DTO to its respective entity. Thus, properties and references of the entity are made available in the DTO (and can be accessed there via content assist).

Enums are an abstraction of the Java enum. They compile to enum classes and can be used as properties in DTOs.

Figure 6 - Defining enums allows using them as variables in DTOs.

Properties of DTOs are references to datatypes or enums. They can be regarded as variables and are defined by a keyword followed by a datatype (Java type or datatype defined in the datatype section) and a name.

Properties can be determined with the following keywords:

The basic property. Defines a variable that can be used within the DTO. Appropriate getters and setters are created.

Figure 7 - Variables can be defined using the var keyword.


Defines a field in the DTO for mapping an id property (used as a primary key in the persistence layer). This keyword is deprecated. If no id is given, a warning is shown. Caution: ID autogeneration causes problems, since the value is not set before the entity is persisted to the database, which can cause problems.

It is advised to use the uuid keyword instead.

Figure 8 - Using the id property, "id" is defined as a unique key.

Creates a field for the mapping of Universally Unique IDs as primary keys. UUIDs must be strings.

Figure 9 - By using the uuid keyword, reliably unique IDs can be used as primary keys and mapped to a DTO.

Defines a field for mapping a version property used by the JPA Compiler.

Figure 10 - A version property can be mapped into a DTO by using the version keyword.

Marks the property as transient. Transient properties are not mapped from the DTO to the entity and are thus not persisted. Getter and setter methods are created.

Figure 11 - The transient keyword allows properties to be excluded from the mapping.

Marks the property as being derived from other values. The logic used in the derivation process may be specified using Xbase. Derived properties are not persisted, and only a getter is created.

Figure 12 - The derived keyword marks properties that are based on other values and are computed at runtime. The calculation logic is translated to Java. Derived properties are excluded from the mapping.

The DTO DSL tracks relationships between DTOs by using the concept of references. Where appropriate, reverse references can be created using the opposite property.

References are defined by the ref keyword, a type and a name. The exact type of reference can be specified as follows: 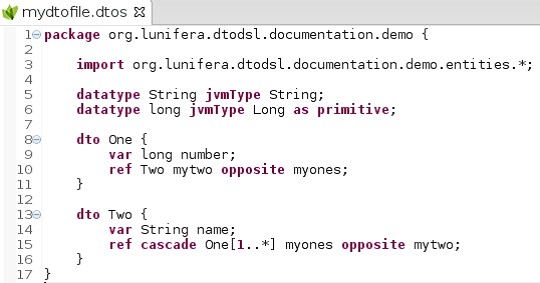 Figure 13 - An example of two DTOs referencing each other. The second DTO maps a cascading, non-nullable, one-to-many reference.

There are two types of inherited features: inherited properties and inherited references.

Inherited features are defined by the inherit keyword followed by the feature type and the name of the feature in the entity. After that, the DTO to which a referenced entity or an embedded bean is mapped may be specified using the mapto keyword. Finally, custom mapper directives may be specified (see Custom Mappers).

Figure 14 - The inherit var keyword is used to map entity properties to DTO properties. Content assist is available. The mapto keyword specifies which DTO an embedded bean is mapped to.

Figure 15 - The inherit ref keywords allow for mapping entity references to DTO references. Content assist is available, and multiplicities and opposite references are automatically carried over from the entity model file. The mapto keyword indicates the DTO that serves as the other end of the reference.

The DTO DSL provides a mechanism for creating custom mappers between DTOs and entities. These can be defined after the declaration of a property or reference, and they control the information exchange for the respective feature.

In order to create a custom mapper, the toDTO and fromDTO keywords are used, followed by the mapper definition in curly braces. toDTO controls the flow of information from entity to DTO, fromDTO vice versa. Within the curly braces, the special words in and out may be used to reference the source and destination of the mapping.

Figure 16 - The toDto section creates a custom mapping from entity to DTO: First, a local variable ArrayList is created, then an InfoDetail with a disclaimer is added to each entry. The in keyword is used to reference the entity for the iteration.

The DTO DSL supports the declaration of operations that can be performed within the DTOs. These operations are based on Xbase and offer a huge set of semantic features, extending the featureset of Java. Xbase additionally offers features like closures. When using operations, bear in mind that it is not good practice to implement business logic within DTOs. Operations can be declared by the def keyword followed by braces containing the inline operation.

Figure 17 - The def keyword allows the inlining of custom methods in the DTO DSL code. These methods are translated into the appropriate Java methods.

Comments can be added anywhere in a .dtos text file and are copied over into the generated Java code. Comments are enclosed in /* ... */.

Figure 18 - The comments added in the DTO DSL are transformed into Java-style comments in the generated code.

Comments before the package keyword are copied over to all generated Java classes - this is the place for copyright notices.

Figure 19 - A comment before the package keyword ends up in all generated Java classes (DTO and mapper classes).